Hallowe’en was invented in 1351 in Ireland when agricultural workers, after months of back-breaking potato digging and processing of the annual harvest, needed a way of getting the kids out of the house for the evening so they could have a quiet Guinness, Bushmills chaser and big joint in a bubble bath.

Trick-or-treating was invented to keep those kids occupied for several hours. The early years were brutal, with tales galore of small ginger freaks kneecapping grumpy neighbours with shillelaghs. Things improved in the 1880s when the most violent Irish children went to live in New York City with Leonardo DiCaprio and Daniel Day-Lewis. The trick-or-treating became gentrified and commodified, growing into the tradition that most people now complain about when they call Hallowe’en an American institution.

However, if you don’t get into the trick-or-treating spirit there is still a violent undercurrent as evidenced below in a classic scene from Curb Your Enthusiam…

In which The Herb Whisperer promises to play the scariest song of all time – White Noise “The Visitation”. Be afraid. Very afraid.

PS: Fraserhead has excellent spatial awareness but poor time perception. So poor in fact that he thinks Show Day (Friday 13 November) is next Friday. Apologies for confusing anyone. We’d edit it out of the podcast but it affects too much of the show, so when Fraserhead speaks please ignore anything he says. Seriously.

Posted on Saturday 24 October 2009 by The Joint | Comments Off on The show: No Phil Collins Required? Nonce Sense!

Comments Off on The show: No Phil Collins Required? Nonce Sense!

Comments Off on RIP Liam Maher 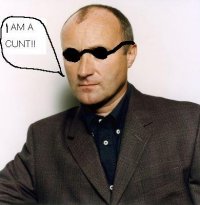 According to the Hamburger Abendblatt, quoted here on Huffington Post, Phil Collins is planning to release a new album in 2010 consisting of cover versions of 30 Motown songs. Apparently, he wants “the songs to sound exactly like the originals”.

If you can’t be arsed bringing one shred of individuality or exercising one braincell in the creation of music.

At this point I was going to link to Paul Morley tearing Phil a new one in an interview in the NME in the 80’s. Or Mr. Collins’ vow to leave the UK should the Tories lose the general election in 1997. Or his ridiculous grandstanding on Live Aid by playing at both London and Philadelphia.

But I can’t be fucking bothered.

Posted on Saturday 17 October 2009 by The Joint | Comments Off on The show: Wobble wobble toil and trouble

For those of you who love noise / wonky / narcotic pop that sounds like it was recorded through a duvet / in a dustbin / on a mono cassette recorder, The Herb Whisperer recommends grabbing a copy of  Aerophones and Aeroplanes Sounds Volume 1.

And here’s today’s playlist in full…

Comments Off on The show: Wobble wobble toil and trouble